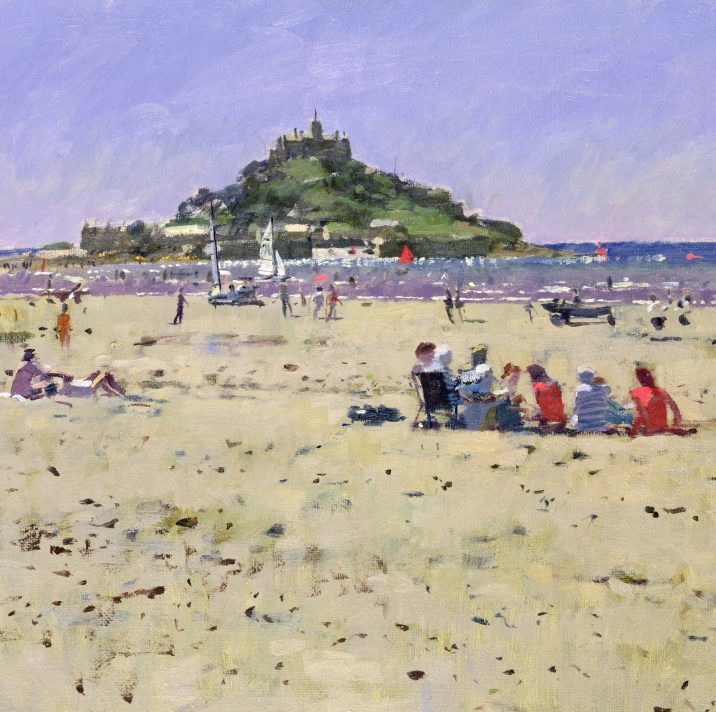 
Q. How would you define your work in three words?

I mainly work in oil, the reason being because I suffer from something called Focal Dystonia, a cramping of the right hand that makes it difficult to draw or use watercolour. While watercolour is a drawing medium, oil painting is a mark making medium, so it doesn’t matter whether my hand is slightly cramped or not, I can still make the marks.

London and Venice. I have a studio in Venice and I’ve also got a studio in Mousehole, Cornwall. So I spend my time between London, Mousehole and Venice. Although I spend more time, and paint more, in Venice than anywhere else. It’s the light that attracts me. Whether it’s London, Venice, Cornwall, or wherever. The funny thing about Mousehole is that it’s the one place in the world that’s close to Venice in terms of light, because it’s very close to water wherever you are. Even if you’re on the coast in Mousehole, the other coast isn’t that far away so you’re still affected by light — by water and reflected light — as you are in Venice.

I always work in a small scale to begin with, in situ. I can’t make preparatory drawings anymore due to Focal Dystonia, so I make a small-scale preparatory oil sketch that is in the same proportion as the larger canvases I use. For instance, the canvases my final paintings are on measure 48×40 or 24×20, so when I’m on the spot I usually work in 12×10 — which is the same proportion — so I can just ‘square up’ a sketch. I always start with these sort of small studies because I really do feel strongly that you musn’t work too long or too large on the spot. When I was young, to paint from a photograph was indecent! Now, as I’ve got older, I’ve learnt ‘what matter the means, as long as the end is good?’, but the trouble with a lot of things that are done from photographs is that they’re not very good, whereas things that are done from actual observation of the subject are usually better. When you’re working on the spot, the light is changing all the time, so you’ve got to work quickly. That’s why I make a living, I have to work quickly because I’m about light!

Q. You’ve been painting a long time now, how do you think your practice has changed throughout your career?

Not a lot. I think the most precious thing we’ve got is our language, our personal language, and I found that. Paintings I did when I was very young are not that different to the sorts of things that I’m doing now, except the things I’m doing now are, in a way, prettier. If I was asked what picture I would want to live by, or be known by, it would be the triptych ‘Ulster Crucifixion’ (1978). When I was in Northern Ireland, without being dramatic about it, I suffered you see, and in order to do good work, you’ve got to suffer a bit. You can’t make yourself suffer, later on, life becomes more comfortable, now my life is, in a way, quite comfortable, but my work isn’t any better for that!

I always say if you’re going to make a living painting you’re going to need two things: you need a bit of talent, and you need a bit of luck. And I’ve been very lucky, I’ve had both. By luck, I mean being in the right place at the right time. And I was in the right place when I got elected to the Royal Academy, I was in the right place when I was sent to Northern Ireland as the official artist of the Imperial War Museum. My mother used to say, if I fell down the loo I’d come up with a bar of chocolate, and I think that just about sums it up really! A lot of people I’ve known have had a lot of talent, but they just haven’t been lucky. And I know other people who have been lucky, but haven’t had talent. And you need a bit of both. I was lucky, I had a bit of luck, and a bit of talent. So I was able to make a living. Q. Could you tell us a bit more about your time in Northern Ireland?

It was the first time the Imperial War Museum had commissioned anybody since the last war, since World War Two. I think they commissioned me because I’d been in the Royal Marines. Because I worked on the spot — everything I do is done from something seen — I was always alright in Northern Ireland. If you used a camera, you were in trouble. If you sat on the street and drew, and they could see what you were doing, you weren’t in trouble. So I never had any hassle in Northern Ireland at all, although I was connected to the Army and the locals in Belfast knew it! I used to go on a programme on television called ‘Seen Around Six’, so all the locals knew me and they knew exactly what I was up to but they never bothered me because they could see what I was doing. If you used a camera, then they were suspicious, because they could never see what you were actually recording.

Q. Can you remember the first work of art you created?

It was a painting of my Granny, funnily enough. The Grammar School that I was attending thought I had a bit of talent, so they hung it in the main hall: that is the very first work of art that I can remember. The very first picture I sold was in 1945. It was a picture of my back garden in Neasden — romantic Neasden! — that was where I was born. [The owner] paid two guineas for the picture although now I get a little bit more than that!

The art critic Brian Sewell, although we were great friends, was always rude about everything I was doing. He once said that I ‘only painted pictures to pay a mortgage’, and so I told him that I hadn’t got a mortgage and asked ‘aren’t you getting a bit fed up of being the most hated critic in London?’ He just laughed so I said ‘but you’ve got a mortgage to pay, haven’t you?!’

This interview has been edited for clarity.