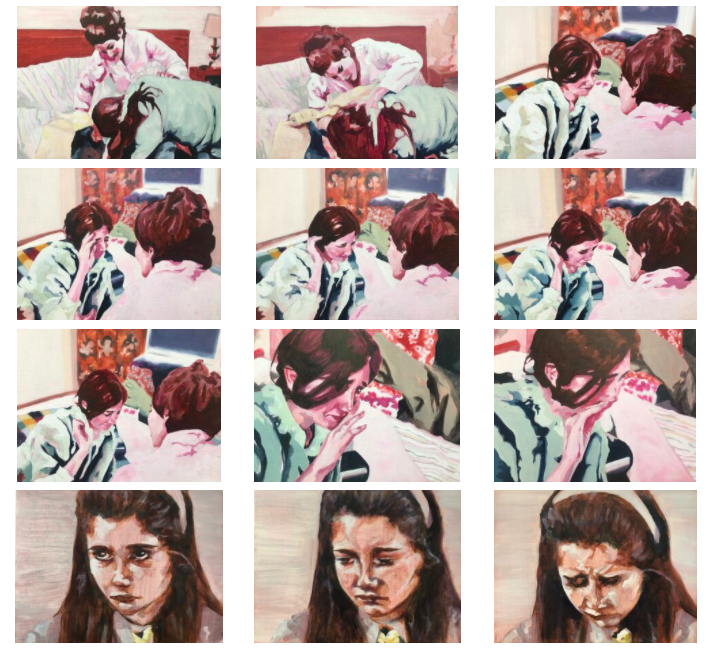 Since 2017, ACS has partnered with Falmouth University to offer one second-year student a £1,000 prize to contribute to the cost of materials in the final year of their undergraduate degree.

Here, we hear from last year’s winner, artist Ren Condry, about their practice, the impact of lockdown and how winning the Materials Prize encouraged experimentation and discovery of new techniques and mediums.

“Winning the Falmouth ACS Materials Prize has been so beneficial for my practice over this past year and allowed me to really push the work I had been planning to make that much further. I have been so proud and happy with what I have been able to complete, especially as the studios were closed before the term ended.

‘In the Pudding Club’ is the last series I completed at Falmouth, and would have been on display at my degree show this Summer. It is a series of 10 works, nine 6 x 8” oil on board and one 130 x 170cm oil on canvas, with their source imagery in stills from a 1970s US public information video on teenage pregnancy. Rather than making a point of this narrative, by taking a series of stills where the narrative is not revealed, the subsequent paintings become decontextualised. This is particularly noticeable in the smaller paintings where the dynamics between the sisters seem to alter with each separate still, as if following their emotional responses in real time. This is the premise behind my works over the last few years – the decontextualisation inherent within found imagery and the effect that painting the images has on their narrative.

Within this series, the relationship between the sisters is particularly important, as is the idea of the bridge between youth and innocence and the actual, far more adult, context of the original video. The use in the title of the idiom ‘in the pudding club’ has both links to childhood friendship groups as well as having the meaning of pregnancy, which is why it suits the duality present within the imagery so well.

I have also painted a series of young dancing girls dressed in pink, with the focus again on narrative and the taking of something private and making it something public: transferring stills from a home video onto a large scale to be shown in a gallery setting. The implicit reference to film is important, as it allows reading of the paintings as part of a greater whole – one the viewer is unable to witness. This thereby linking it back to its origins in the decontextualisation of the source imagery.

Without the help of the ACS Materials Prize I would not have been able to purchase the materials needed to make this many paintings or experiment as much as I was able. It has benefitted my practice in that I was able to play around with surface and colour without the restraint of worry that something wouldn’t work out and set me back. Instead I found that working on board is something I really love, and this pushed my work further forward both conceptually and practically.

I am now working on further additions to the ‘In the Pudding Club’ series as the imagery has really captured my imagination and I’d love to continue with it. ”